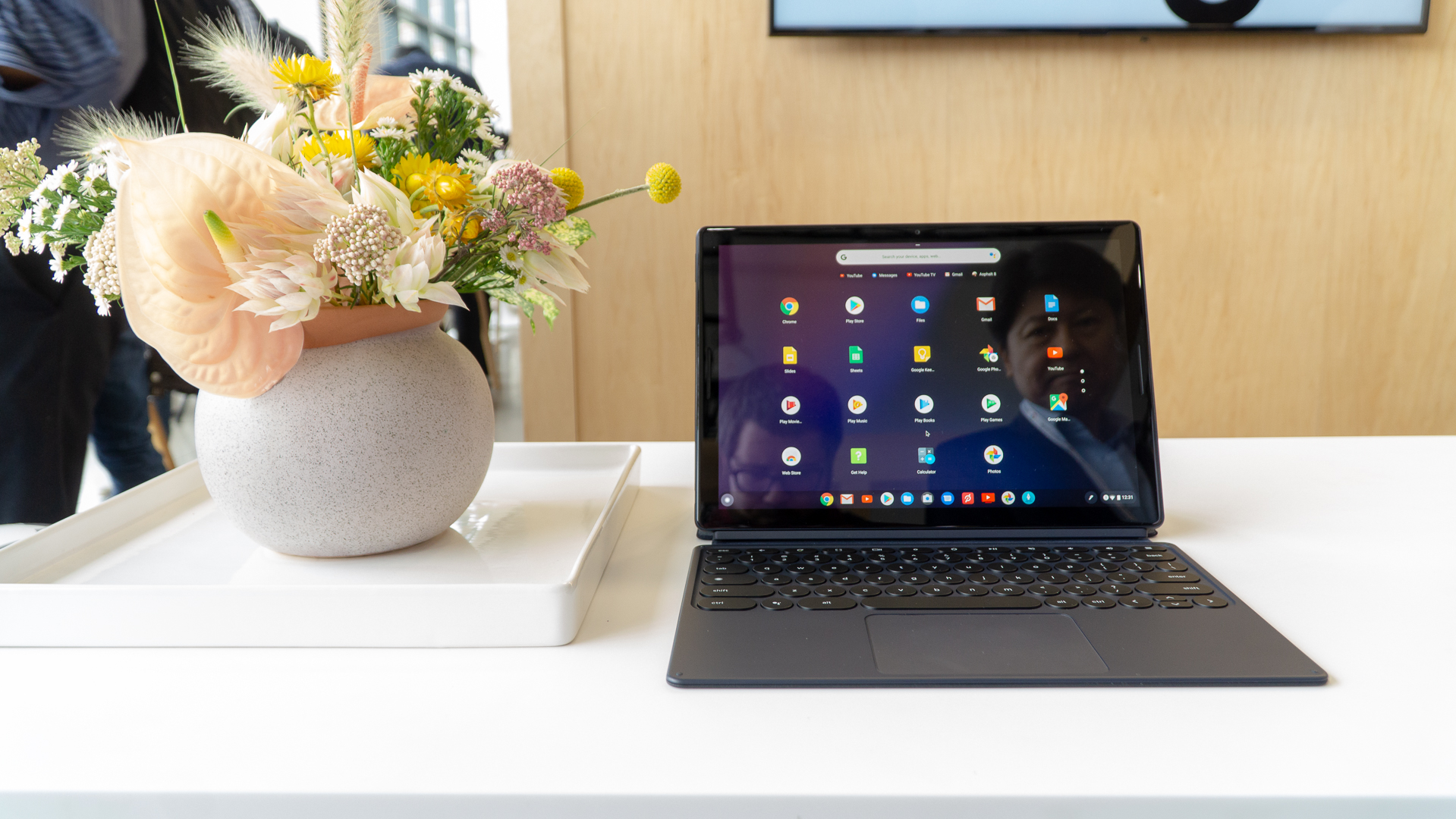 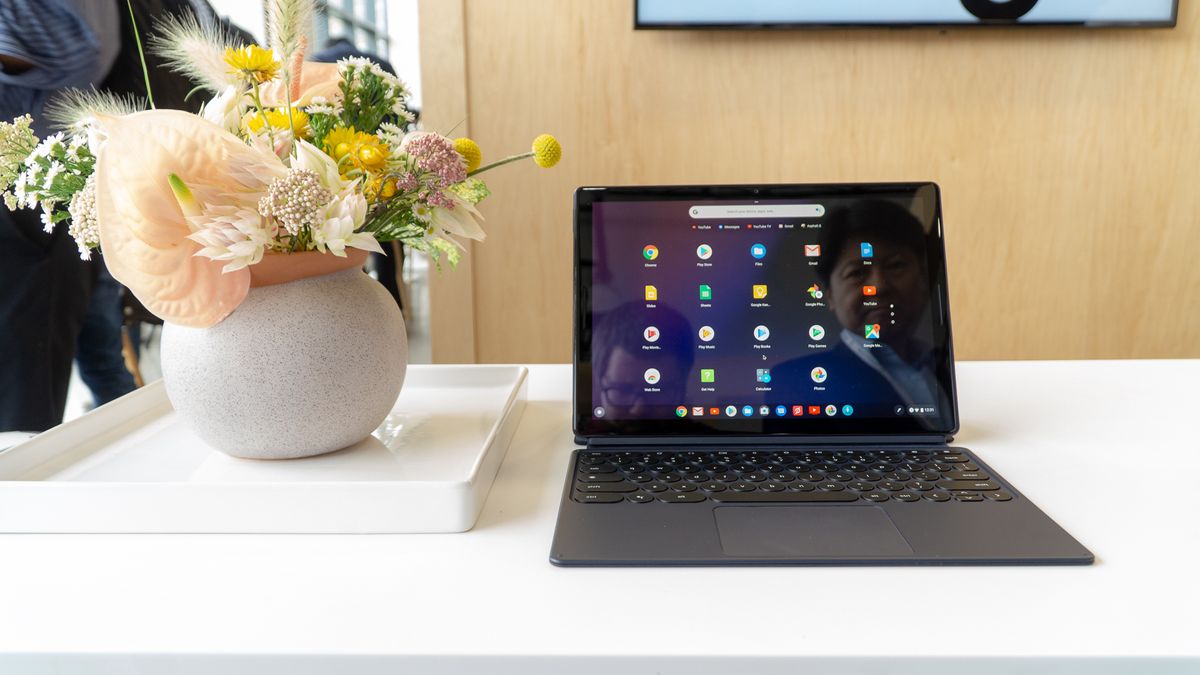 Confirming the weeks, if not months, of leaks and rumors, Google’s 2-in-1 productivity tablet is here: the Pixel Slate. It’s a simply gorgeous device, unsurprisingly, but is it powerful enough to get your work done with on the go?

That’s what we’re wondering most about following our short time with the device and looking at its available configurations. This is a tablet that’s priced more like an iPad Pro than a Surface Go, but the starting configurations of this tablet are more like the Surface Go.

Is the Pixel Slate bound to be the 2-in-1 tablet to beat for people that need to work (and play) on the go? It’s definitely up in the air.

That starting price gets you an unnamed Intel Celeron processor powering that 12.3-inch ‘Molecular’ touchscreen at a 3,000 x 2,000-pixel resolution. That’s paired with 4GB of memory and a 32GB solid-state drive.

This layout can be vastly upgraded from here. There are Intel Core m3 and Y-series and even Core i5 processors available as well. Storage tops out at 256GB and memory can go as high as up 16GB on some configurations.

Everything else about the tablet remains, including a fingerprint sensor embedded into the power button, two USB-C 3.1 ports and two 8-megapixel cameras. Comparing this starting option to the lowest-end iPad Pro (12.9-inch), the Pixel Slate comes in 200 bills lower, but with half the storage and what’s likely to be a much weaker processor.

Google hasn’t yet announced when the Pixel Slate will be available, but has invited anyone interested to join a waiting list.

Of course, Pixel Slate looks a lot like the leaks that made it out through the second half of this year. The ‘Midnight Blue’ matte aluminum finish wraps this 7mm-thin (0.27 inches) tablet like a glove, and shines under direct light – it also feels cool to the touch.

The tablet appears to have considered everything that an ultra-mobile user needs, namely versatile ports in USB-C on either side and a built-in fingerprint reader in the power button for security. This all comes in a package weighing a mere 721g (1.6 pounds) – ultra-mobile indeed.

Around the front of the tablet is the beautiful display that’s wrapped in Corning Gorilla Glass 5 that curves around the edges of the device. The displays gorgeous, smooth look helps make its otherwise thick bezels more palatable.

The display, beset on both sides by booming (yet still tinny) speakers, uses new technology that Google calls its ‘Molecular Display.’ This tech employs low-temperature polymer crystals that move electrons faster than standard displays, which is what allows the display to produce such a high pixel density compared to other screens of similar dimensions.

At first glance, the display is simply popping in color and contrast, but even 400 nits of brightness isn’t enough to counter the glare produced by a glossy panel under sunlight. The display’s pixel density of 293 pixels per inch (ppi) downright trounces the 12.9-inch iPad Pro’s of 264.

We’re left a little nonplussed by the official Google keyboard cover, however. The circular keys are an interesting differentiator, but one that isn’t really necessary and will only present an extra learning curve. Otherwise, the travel and feedback on the keys is just fine and in line with other keyboard covers we’ve encountered.

However, while the keyboard cover is stylish and feels pleasant to touch, we find that it doesn’t fit snugly to the display when closed. Rather, it slips and slides a bit in place, which makes holding it like a folio a little more awkward than it should be.

This is, unsurprisingly, where we’re most concerned regarding the Pixel Slate. Simply put, the tablet’s starting configuration with an Intel Celeron processor puts it closer in performance potential to the Surface Go tablet or a budget Chromebook than the iPad Pro – yet, the complete package (keyboard cover and all) is priced closer to that of iPad Pro.

Surely, the Pixel Slate will go toe-to-toe with these high-end, productivity tablets like the Surface Pro at more expensive configurations but, with a keyboard cover that costs a whopping 200 bucks or quid, at what cost? That’s currently unknown, but we’re not exactly bullish.

We find the Pixel Slate to perform fine enough based on our brief time with a few models, whipping through G Suite pages and YouTube videos, but it’s unknown which configuration those models are.

Google promises up to 10 hours of continuous use from Pixel Slate – which is also what it promised on the Pixelbook – regardless of configuration, and up to two hours of use from a 15-minute charge.

What we’re more excited about are the Chrome OS optimizations that Google has made exclusively for Pixel Slate. Features like a night light for blue light reduction, split screening apps and a ‘do not disturb’ feature help bring Chrome OS to parity with Windows 10 and macOS computers.

We’re excited to try out these new features in a full review, but for now we’re skeptical about the Pixel Slate’s raw performance.

The Pixel Slate is a bit of a perplexing device at first glance. It’s wrapped in a premium frame with first-class build materials and new technologies at the forefront. However, it’s also mighty expensive for what’s on offer.

For instance, the new Surface Go uses an Intel Pentium Gold processor and has 64GB of storage – twice that of the Pixel Slate at its entry level spec – for 200 bills less. Sure, it’s also a 10-inch tablet, but it’s the power profile we’re concerned about here, as it should be a chief concern when buying a mobile computer.

That said, Google has vastly improved Chrome OS to make it a more viable 2-in-1 computer operating system. It will take a full review for us to suss out just who this device is best suited for, if anyone or simply everyone. Until then, we’re uncertain of the Pixel Slate’s ability to combat the iPad Pro or Surface Pro as a primo 2-in-1 productivity tablet.