The MSI Aegis 3 is a gaming PC that proves you don’t need to hog an entire desk to be an impressive – in both looks and hardware – machine. While other gaming desktops that include cutting edge components like to tower menacingly above us when placed on a desk (including the Aegis 3’s bigger brother, the MSI Aegis Ti3), the Aegis 3 is a more sensible affair.

That’s not to say it’s lacking in the looks and components department, however. It features a similar aggressive design to the Ti3 (which reminded us of a decapitated robot), but in a smaller form factor which will make it more convenient for many people, especially if you’re looking for a gaming PC that you can lug around with you to events and LAN parties.

With a smaller footprint comes a smaller price tag as well. Does the MSI Aegis 3 do enough to warrant a place on your desk? Let’s find out.

The MSI Aegis 3 comes in a variety of configurations and prices to match.

The same setup (but with a 2TB hard drive) will set you back $1,568 in the US, meanwhile. We don’t currently have a price for Australia, but as the UK and US prices are very close to last year’s model, we’d hazard a guess that it will be around AU$2,599.

While these are certainly not low prices, they compare favorably to last year’s model, with improved components for not much of a price premium. It’s certainly a more compelling price proposition than the Aegis Ti3, which costs almost four times the price of the Aegis 3, though it comes with a lot more powerful components.

As we mentioned earlier, the Aegis 3 comes in a unique (to the Aegis range) chassis that looks impressively alien, and even in the smaller design of the Aegis 3, its still eye-catching enough to garner a few comments as people saw it on our desk.

LED lights (that can be configured by MSI’s bundled software) glow from within, giving it an impressively intimidating look, and small arms on either side of the chassis not only help make the Aegis 3 look even more alien, but they can be used to hang your gaming headphones from.

As with the previous model, the footprint is impressively small, and at 14.8 inches deep, the desktop’s footprint is on-par with the Alienware Aurora and the Corsair One.

The smaller size of the chassis does make it harder to upgrade the components later on, with reduced space to get in and fiddle around with the hardware, and unlike the Alienware Aurora you need tools (well, a screwdriver) to open up the case. This won’t be a huge problem for people who regularly open up their PCs to tweak, but it’s not quite the user-friendly upgrade experience that the Alienware offers.

As with previous models, the Aegis 3 has a sturdy handle on the back, enabling it to be carried around. The chassis is tad heavy though, coming in between 17.75 and 25 pounds, depending on its configuration.

Around the back you’ve got a wide selection of ports, including a number of USB ports, Ethernet and audio. Depending on the GPU you get, you’ll also have a fair amount of video ports as well.

However, the dedicated virtual reality HDMI ports of last years model are no more. This is likely a reflection of the lack of interest in VR, and if you do have a VR headset, there’s still plenty of ports to plug it in, they are just not quite as convenient.

The MSI Aegis 3 model we were sent also has an optical DVD drive, which is something of a rarity in machines these days, even desktop PCs. While running games or installing programs from a disc seems rather archaic, it’s nice to have the option, especially if you live somewhere with poor internet connectivity. 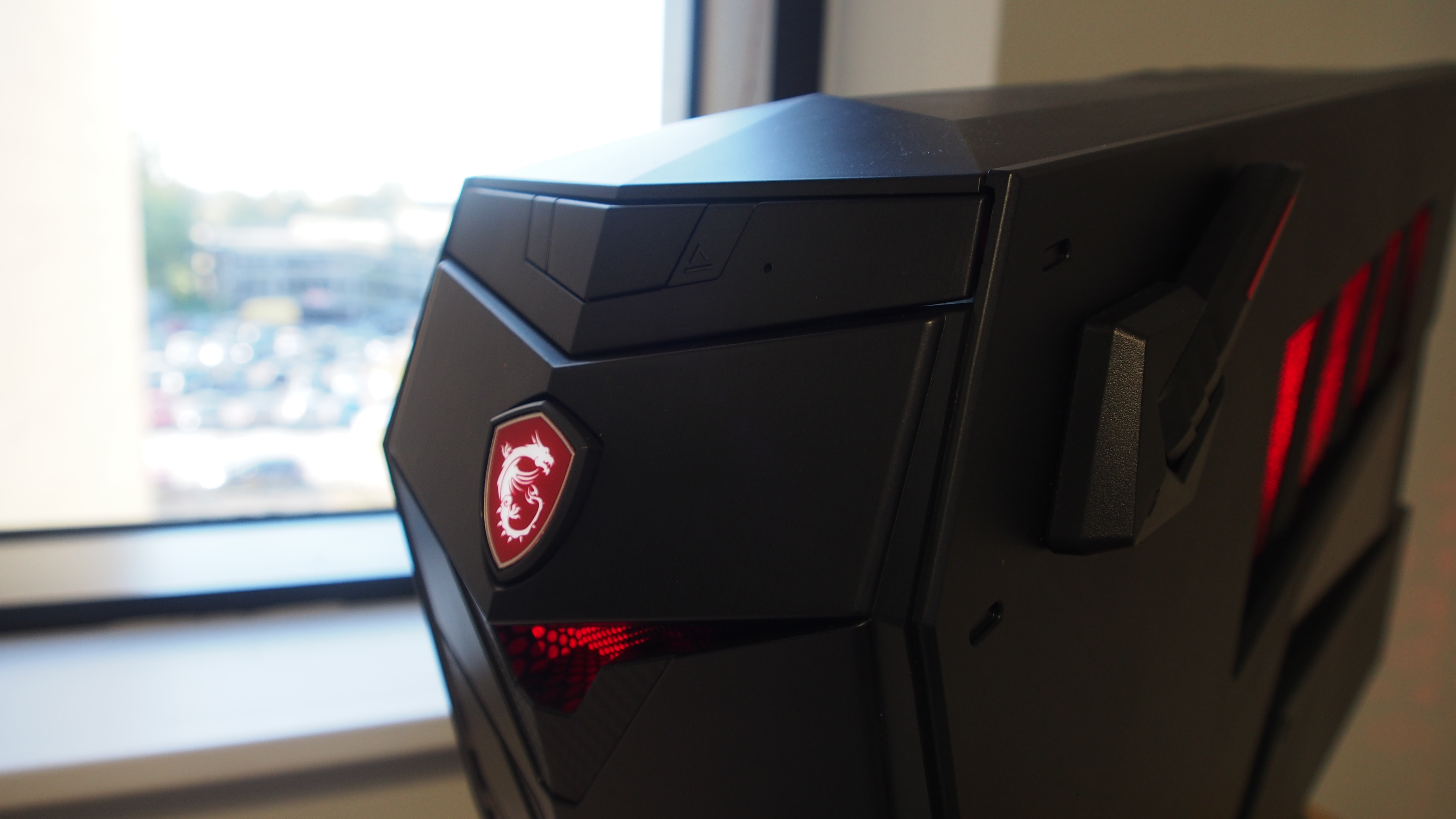 The model we were sent of the MSI Aegis 3 is a bit of an odd one, and isn’t easily available in some markets. It includes an Intel Core i7-8700 running at 3.20GHz, a very capable modern processor. It also comes with an Nvidia GTX 1070 Ti graphics card with 8GB of memory, which is a decent upgrade over the GTX 1070 you get in some configurations. While it’s not the highest-end GPU by any means, especially with Nvidia’s RTX 20-series cards now available, it’s more than capable enough to play modern games at 1080p, or even 1440p resolutions.

In day-to-day use the MSI Aegis 3 felt fast and responsive in Windows 10, with the solid state drive helping it boot and load apps and games quickly.

Of course, you won’t be buying the MSI Aegis 3 just to whip up some spreadsheets in Excel, and in our time playing games on the machine, we were very impressed, especially when playing at 1080p. We paired the MSI Aegis 3 with the MSI Optix MPG27C gaming monitor, which is a 1080p screen with support for high refresh rates of 144Hz.

This combo of 1080p resolution and high refresh rate is the ideal balance for a machine like the MSI Aegis 3, as the 1080p resolution doesn’t tax the 1070 Ti, so you can easily play modern games at high or ultra graphical settings. Meanwhile, the power isn’t going to waste, as you’re getting frame rates well above 60 frames per second, something games consoles like the Xbox One and PlayStation 4 can only dream of.

Take the results we’ve seen with Middle Earth: Shadow of War. This is a graphically-demanding game, but the MSI Aegis 3 managed a very decent 90 frames per second on ultra settings. If you’re looking to use the Aegis 3 with higher resolutions, such as 1440p (2,560 x 1,440), then you’ll still see very good performance at high settings, though the framerates won’t be as high.

For people who see 60fps as the gold standard of gaming, then they will be very happy with the Aegis 3, though it might struggle with 4K resolution in some games at their highest settings.

A glance at the benchmark results show an impressive improvement over last year’s Aegis 3, which scored 5,740 on the demanding Time Spy 3DMark benchmark, compared to this year’s 6,777.

Results across the board are improvements over last year’s model. Although this is to be expected, the fact that MSI is pitching this year’s model at around the same price as last years, is a very welcome move, which means you get an impressive performance bump for your cash.

This year’s MSI Aegis 3 is an excellent update that brings some excellent hardware revisions, while keeping the eye-catching smaller form factor. The design is unique, with some nice touches for PC gamers, and there’s plenty of ports and upgrade potential, despite its (comparatively) small size.

Gaming at 1080p is excellent, with even the most recent games running superbly at ultra graphical settings. It’s not the most powerful gaming PC on the market, however, and if you’re looking for a killer gaming PC that can handle 4K resolutions, you’ll want to look elsewhere.

Considering the performance and design, we think MSI has pitched the price of the MSI Aegis 3 just right, especially as it can be had for around the same price as last year’s model. However, there are a number of configurations, and not all are available in every market, which makes getting hold of a particular build a bit more tricky. It’s not entirely clear where you can buy the exact specifications MSI sent us, for example.

Overall, the MSI Aegis 3 is a brilliant update to an already impressive gaming PC. Don’t be deceived by its smaller stature, this is a gaming PC that can challenge the big boys.