A good mechanical keyboard is the mainstay of any gamer’s setup. These switches have been around far longer than membrane or chiclet have been, and will likely stick around far longer too. Whether it’s the incredible endurance imparted by those 50 million click switches, or the plethora of different styles of switch to suit the end user, mechanical keyboards like the MSI Vigor GK80 have revolutionized the way we look at the keyboard.

Going from membrane to a mechanical is an experience in itself, similar in how you felt the first time you booted up that solid state disk instead of a hard drive. It takes time to get used to, the actuation points are so much faster, the satisfaction as each switch is pressed down and actuates is second to none, and the price, although jaw wrenching at first, soon becomes an acceptable burden for an experience that’ll welcome you through many hours of your PC-using experience.

MSI’s Vigor GK80 is one of the first Micro Star keyboards we’ve seen, and it comes into this tightly-fought out peripheral world with a pretty good start. Whether that’s the Cherry MX red switches at its heart, to the aluminum backplate, included wrist rest, and dedicated media controls, on the whole it’s a keyboard that doesn’t appear to disappoint.

The first hurdle, however, is the price, and as usual MSI has come out at the wrong end with this one. It’s a fairly beefy $160/£160/AU$260 if you can find it in stock. Hardly cheap that’s for sure.

Especially when you consider a similar, third iteration Corsair K70 comes in at $160, £150 or AU$190, and with that you get your choice of switch, some refinements in ergonomic, and a far stronger software suite than the likes which MSI can muster.

It’s not to say the GK80 is particularly bad. Not at all. It’s the price you’d expect if you wanted to go for a full mechanical cherry keyboard. Turn the clock back to four years ago and it’d even seem reasonable, but in a world littered with custom mechanical switches and more features than you can shake a stick at, it just doesn’t hold enough weight, and that’s a problem. 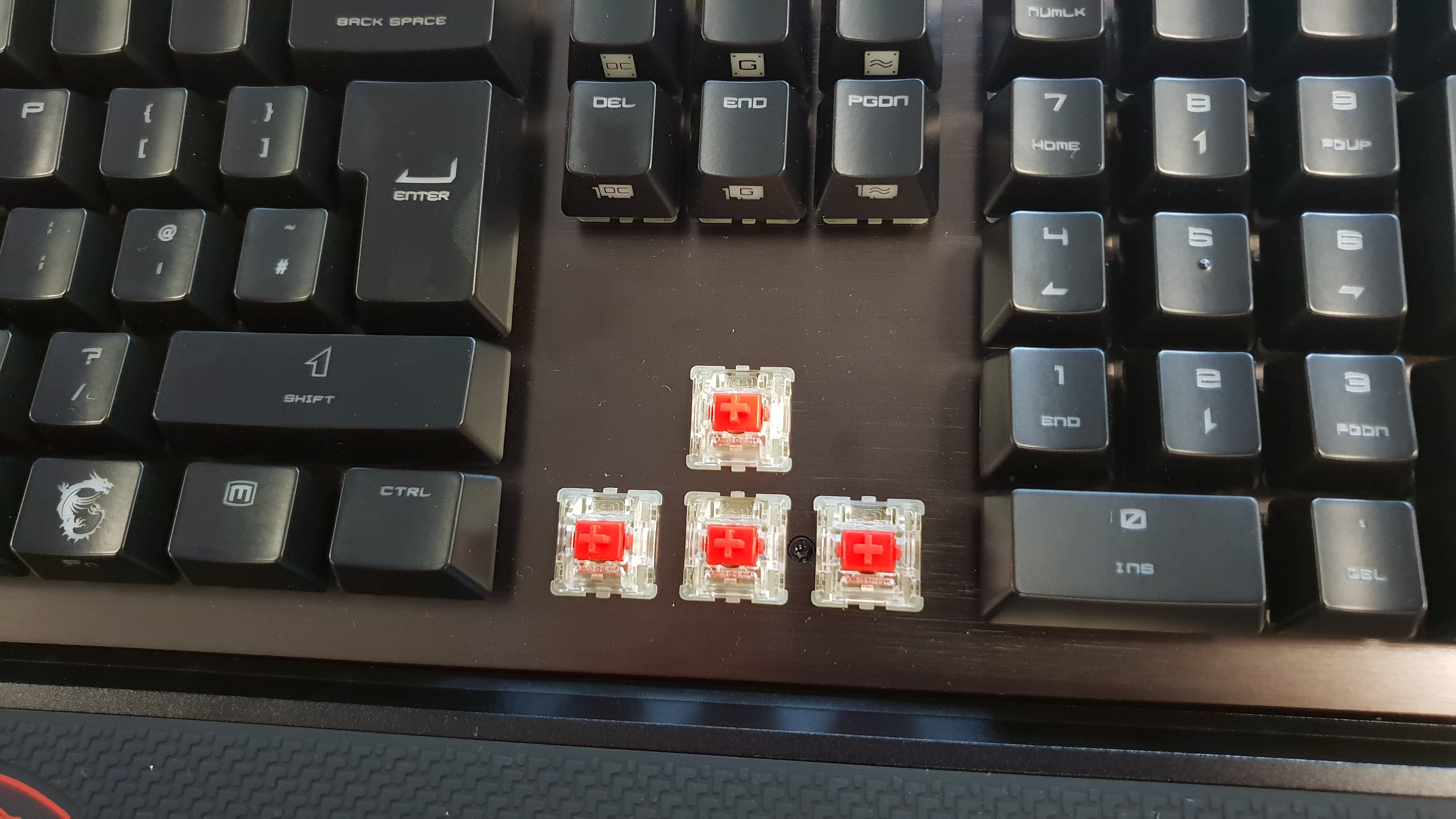 So then, let’s get down to the nitty gritty. What do you get for your money? Well, the MSI Vigor GK80 is a full-sized block of switches, in the usual qwerty layout. There’s a ton of on-board configuration switches baked in with the MSI dragon modifier key, which does take some experimenting to get your head around.

There’s some pretty nifty cable cutouts below for cable management, an included wrist rest, the usual non-slip height raising feet, some dedicated media keys, and a selection of key caps to replace the WASD section of the board.

Overall build quality is the MSI Vigor GK80’s strong point, as there’s little to zero flex in the board, and when it’s down on the desk, movement whilst typing, even during the most frantic of firefights, is barely noticeable.

The switches are Cherry’s now world-renowned MX Red, which are the gamer’s key switch of choice. They are completely linear, fast to actuate, and even faster to type on, although it lacks that tactile response of the likes of the Blue switches. However, it’s nonetheless a satisfying experience. 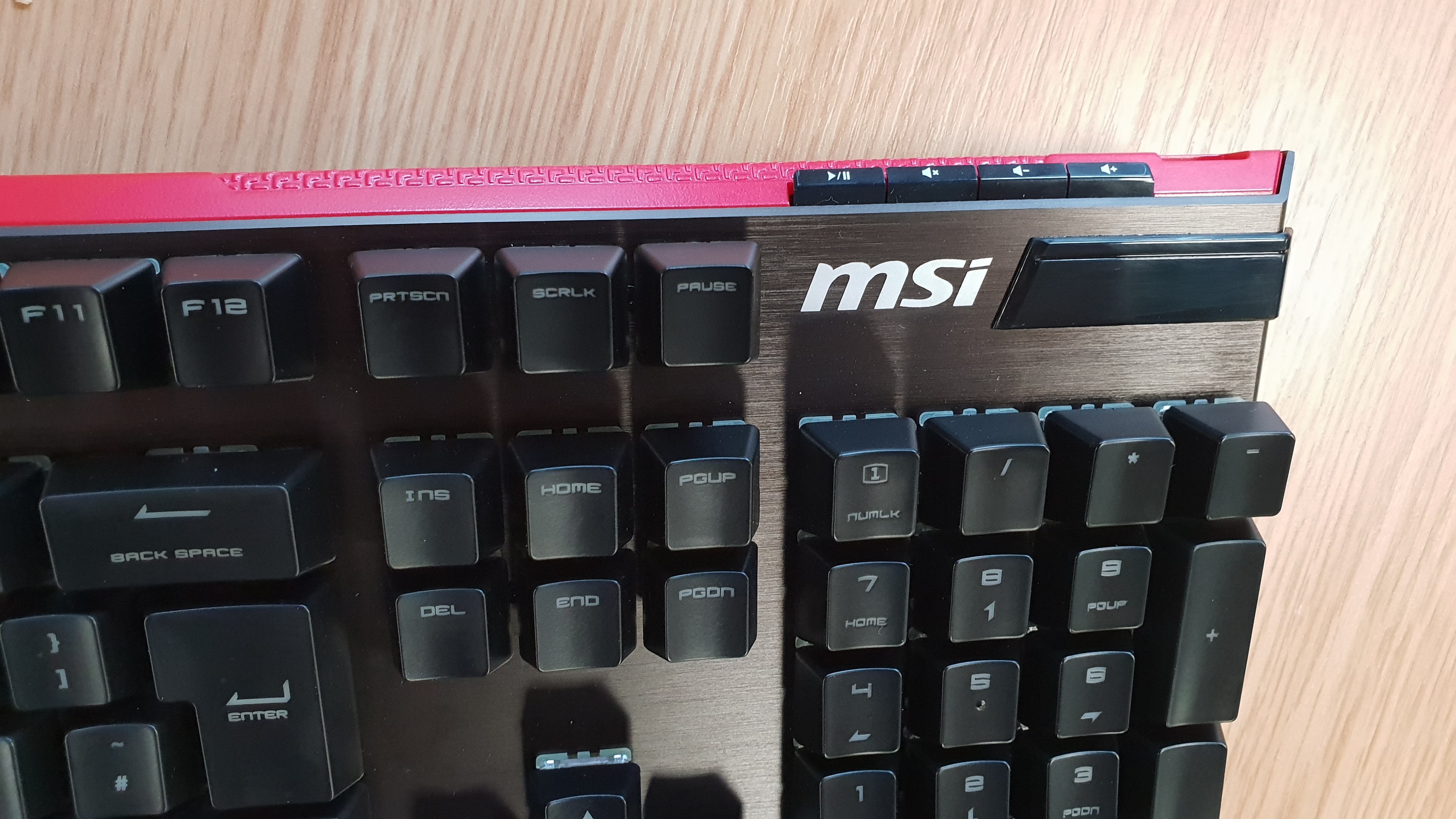 As far as using the MSI Vigor GK80, though? Well, it’s a pleasant enough affair. It’s a design mostly carried by the key switches themselves. We had trouble with a little wrist-ache without using the numpad, however that could just be due to some long nights of typing.

MSI’s software is still in its infancy, and just isn’t intuitive enough, or easy to use in its current configuration. Hell, it doesn’t even support resolutions above 1080p. From complicated syncing procedures, to configuration issues, it’s something that MSI definitely needs to take a second look at. But aside from that, everything else is fine and dandy. 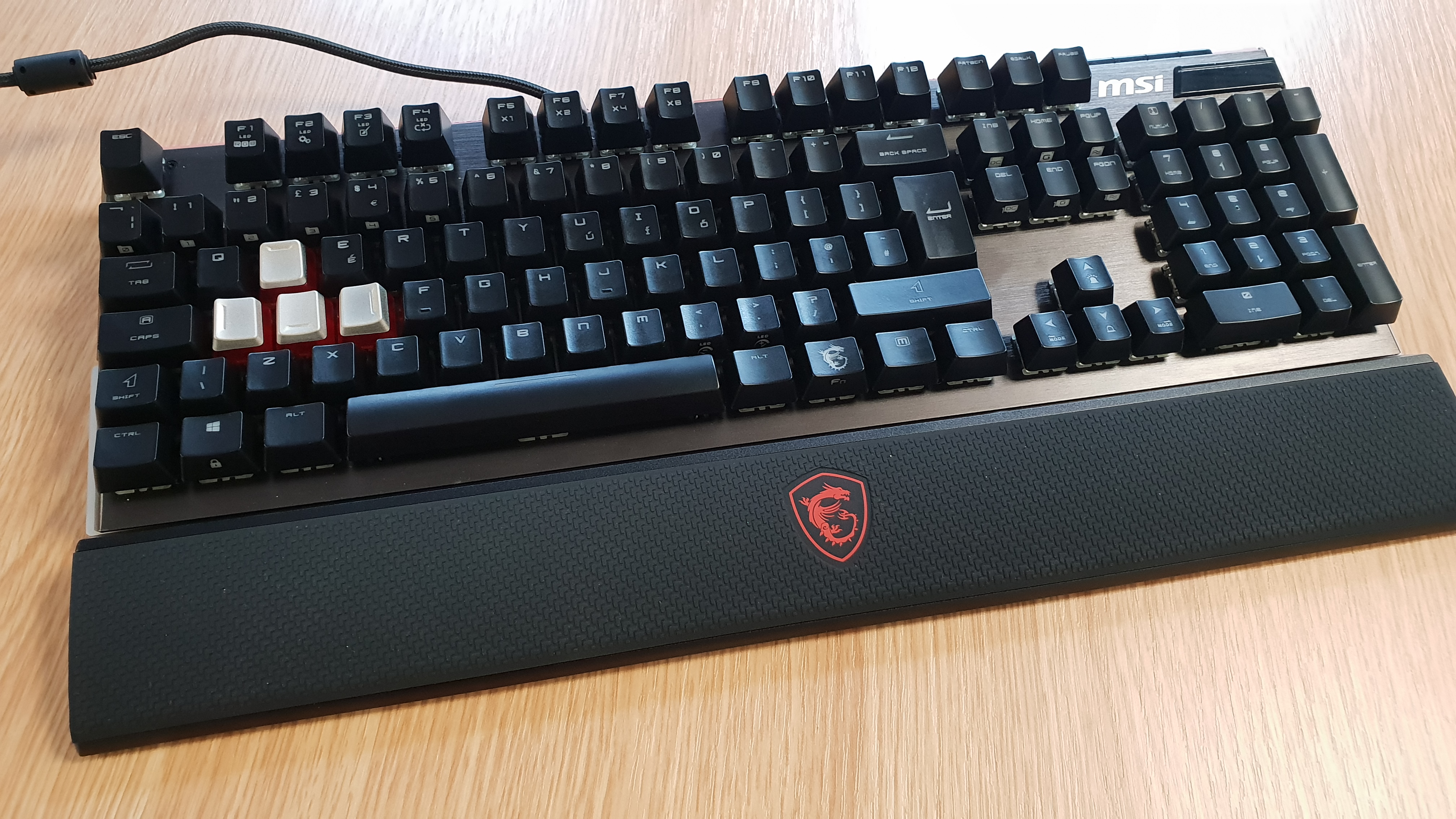 So to conclude then, MSI’s Vigor GK80 is an intriguing entry-point into the world of the mechanical keyboard. It’s not perfect, not by any means, but it’s a very good attempt.

With some minor revisions, adjustments, and a nudge down in price it would’ve been close to 5 stars, but for the time being 3.5 is where it’s at.

If this was released four years ago, it’d be a different story, but with an range of switches now available to well established rivals at better price points, it feels just a little behind the times. Unless you’re a die-hard MSI fan, for the time being at least, you’re best bet is to wait until revision two.

Gear Envy: My Collection of 500+ Pieces of Computer and Gaming Hardware

Replay – The Mummy: Tomb Of The Dragon Emperor

All Specs of Microsoft Surface Laptop 2